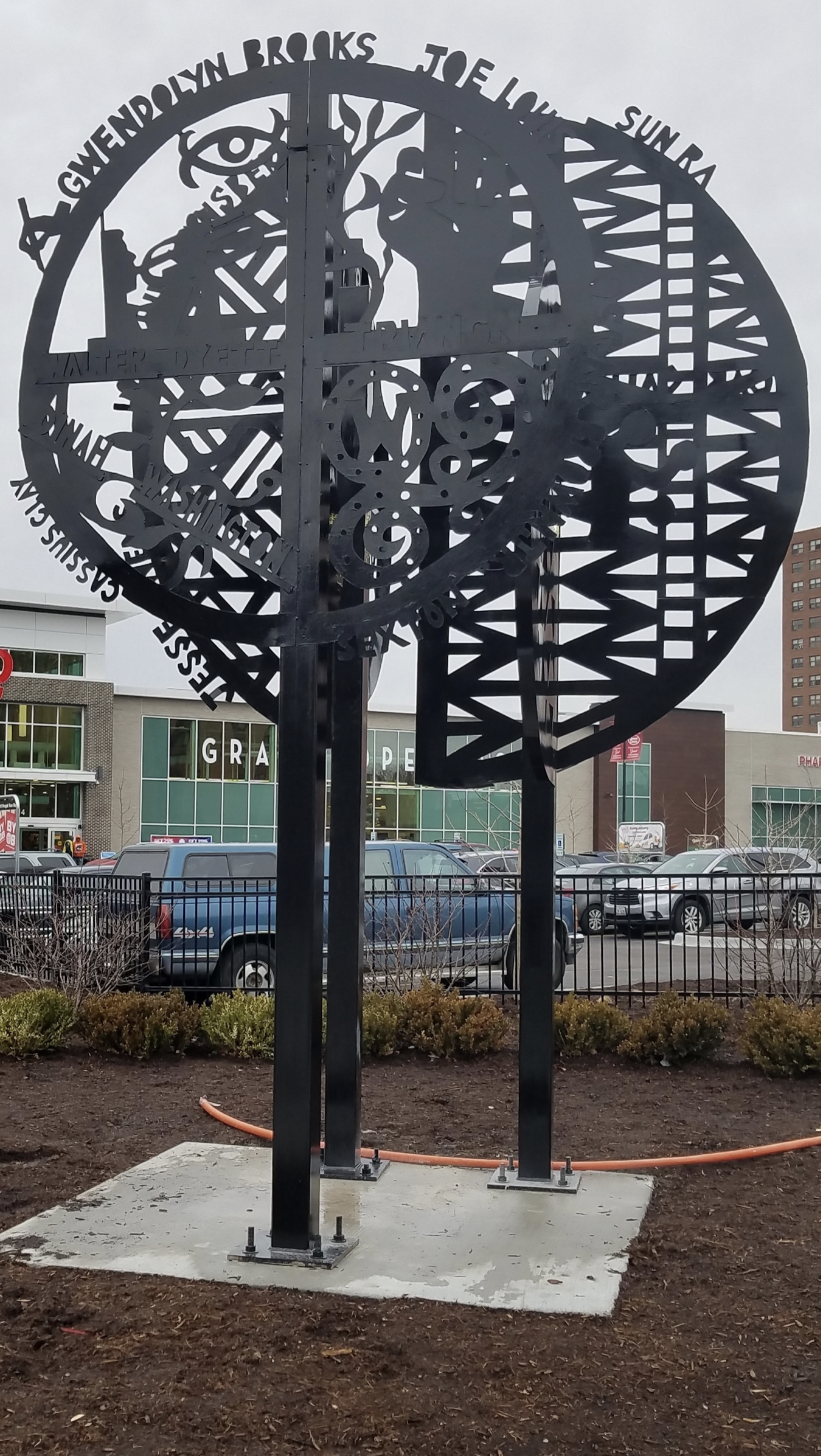 Wonders of Woodlawn is a painted steel sculpture measuring 17’ tall and 11’ wide that was completed and installed in March of 2019 at the corner of 61st and Cottage Grove. The Wonders of Woodlawn celebrates the history of this Chicago community. The sculpture references a long list of Woodlawn’s illustrious residents from the past, including Gwendolyn Brooks, Dinah Washington, Sun Ra, Joe Louis, Cassius Clay, Emmett Till, Cab Calloway, Robert Sengstacke, Walter Dyett, Oscar Brown, Jr., Lorraine Hansberry, Minnie Ripperton, and Jesse Owens. Significant architectural references include the Trianon Ballroom, Tivoli Theatre, and Sexton School. A large W symbolizes Woodlawn and is connected to an ornamental form that references a once-thriving former historic theater and cinema-house culture.

The sculpture conveys this history through the use of iconic symbols: The horn player celebrates former musical entertainers; the Black Power fist references a history of pride, struggle, and resistance; and the Adinkra symbol, which looks like an eye (the all-seeing eye), refers to a greater being. Various plant forms move throughout the sculpture affirming our connections to nature. A young girl takes flight from the W, suggesting the pursuit of lofty goals.  The silhouette of a boxer symbolizes boxing history in the area, and the cutout portrait of the woman celebrates feminine energy.

The large circular forms of the sculpture were inspired by the historic Ferris wheel which appeared in Chicago near Woodlawn during the 1893 Columbian World’s Fair. The circular forms are filled with pattern designs that originate in African textiles and carvings. The pattern work also refers to the well-known Afri-COBRA artists who were based in the Woodlawn area during the 1970s and continue to reside there today. These circular elements combined with the sculpture’s verticality suggest the stability of a tree-like form, which puts down deep roots and develops above ground in dynamic and powerful directions.

The Wonders of Woodlawn was commissioned by Grove Parc Venture Partners, DL3 Realty, and Terraco Real Estate. Special thanks to Felicia Dawson, Preservation of Affordable Housing, Jewel-Osco, and the Woodlawn community.