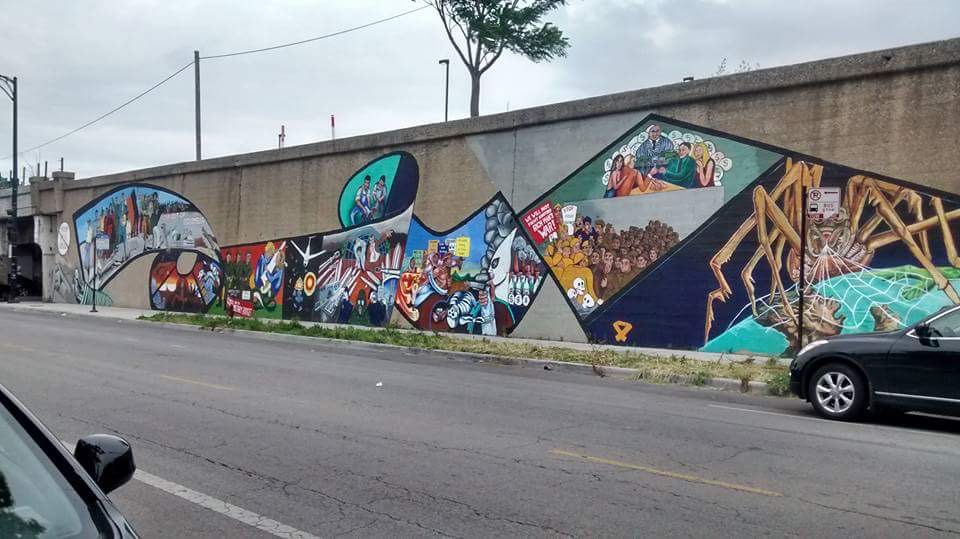 Originally painted in 1980 on the corner of 18th Street and the Western tain viaduct by Mark Rogovin, Marcos Raya, Roman Villareal, Gamaliel Ramirez, Jose Guerrera, Aurelio Diaz, Carlo Cortez, and the Wisconsin 4, Prevent WW III / Fallen Dictator was restored in the summer of 2016. The mural was restored by one of the original artists, Marcos Raya, with Amanda Mudrovich as the lead assistant artist.

The 300-foot mural unfurls like a roll of film, with murals of different themes making up its multiple panels. The first panel, designed by Marcos Reyes, depicts a fallen dictator, Argentina’s Somoza, and the words ‘USA out of Columbia.’ The following panels show a post-nuclear war cityscape illustrating the dangers of nuclear warfare; soldiers with drawn guns standing over buildings labeled Unemployment Office and Public School, draped in a banner reading “Closed due to Military Budget”; and Donald Trump and Hilary Clinton wrestling over a missile. While the mural began as a political statement, the 2016 restoration changed the writing and signage on several panels and added then presidential candidates Hilary Clinton and Donald Trump to ensure that the messages remained relevant to the community and the political climate. The remaining panels depicts, among other images, protestors facing a menacing KKK figure with a gun, designed by Aurelio Diaz, and a giant tarantula attacking Mother Earth with the words “oil,” “credit cards,” “corporations,” “Wall Street,” and “Internet” written on its legs. This final panel was designed by the Wisconsin 4.

During the restoration process, many community members stopped by to share stories about their memories of the mural, to watch the process of the restoration, and sometimes to offer help. The mural was re-dedicated on June 2nd, 2016.