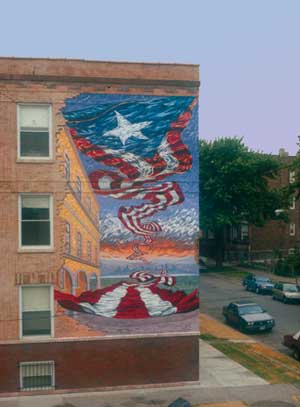 Honoring Humboldt Park’s predominantly Puertorriqueño heritage (Boriquen is the island’s original Arawak Indian name), this mural depicts the Puerto Rican flag flying from the island, across the sea, and across Lake Michigan into the Chicago skyline. In turn, the flag unfurls from Chicago and returns to the island. The circle of flags suggests the ongoing exchange of culture and ideas between the two communities.

Honor Boricua was painted by Hector Duarte with assistance from Sandra Antongiorgi and although the project was delayed due to unseasonable cold and rainy weather, the 30 x 20-foot mural was welcomed to the community in an opening ceremony held on June 11th, 1992. The mural is a project of LUCHA (Latin United Community Housing Association) and Chicago Public Art Group.