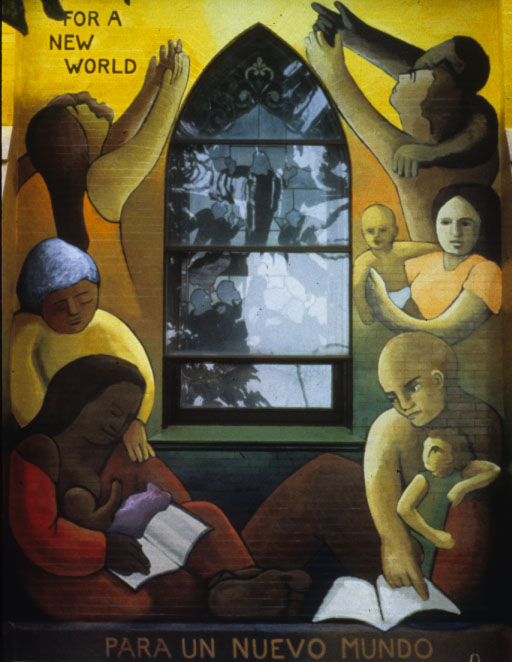 For a New World, or, Para un Mundo Nuevo was created by CPAG co-founder John Weber and Oscar Martinez in 1973. The mural was the result of nearly a year of discussions with members of the Holy Covenant Church, who wanted the wall to be “a window to the world” that could express both their concerns and their faith. The resulting mural is divided into three sections by buttresses and each section surrounds a stained glass window. At the rededication ceremony after the mural had been restored in 1996 by John Weber and Bernard Williams, Pastor Beckonchrist explained the meaning of each section. The first, “Confession,” “symbolizes the evils of our time – brutality, killing, repression.” The second panel, “The Word,” “shows the promise of the Word, the promise of a new world where there will be neither oppressor nor oppressed, exploiter nor exploited, where justice and peace seem like a new city. The new world is symbolized here by men, women and children, young and old, gay and straight, all racial groups, living in light and harmony.”  The last panel “Offering,” “represents the dedication of our lives to bringing about the new world of justice in our daily work.”

The mural was once called the “most hopeful mural in the City of Chicago” and is highly visible as it can be seen from the “L.”.