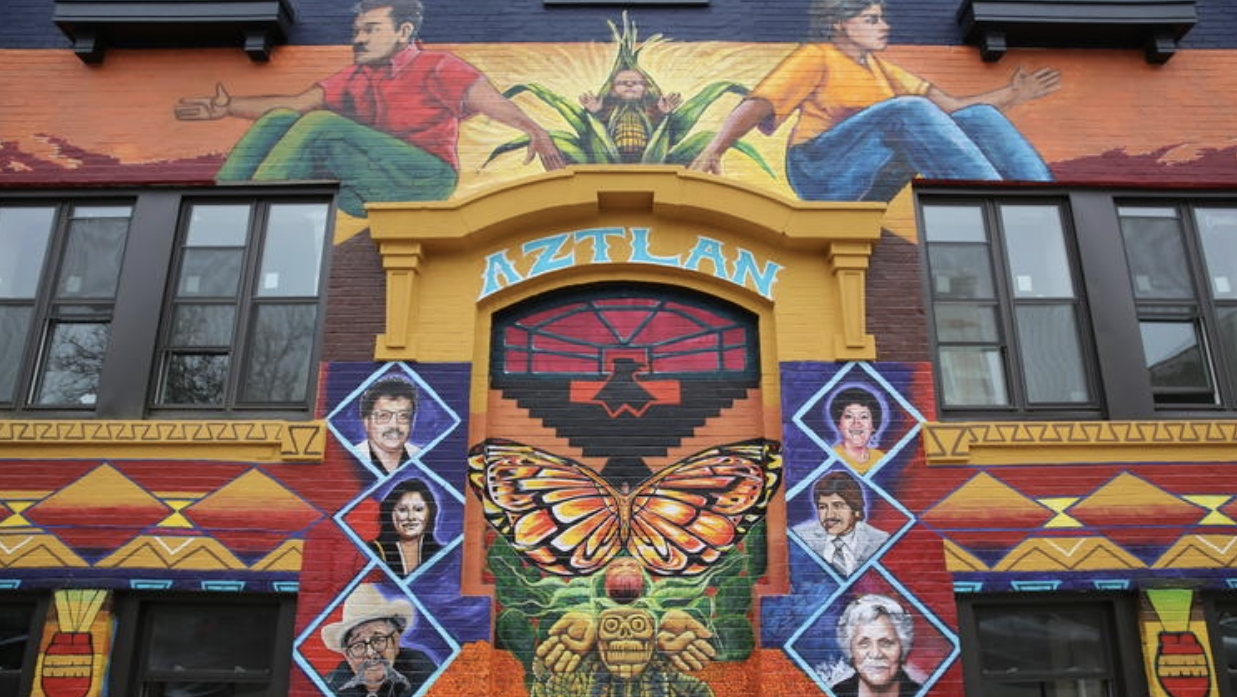 n 1970, Pilsen native Ray Patlán was studying at the School of the Art Institute and sharing studio space with Mario Castillo (a Chicago mural pioneer) at the Casa Aztlán community center when he painted a series of interior murals in the center’s auditorium titled My Father and Yours. The murals took a year to complete and were meant to remind viewers of their heritage. In one area, Patlán’s father was depicted breaking free from chains attached to machinery while emerging from maiz; in another, Casar Chavez is depicted with industrial workers. Patlán hoped to “express how what is often described as progress imprisons people.”

From 1971-1973, Patlán led a group of forty local Neighborhood Youth Corps members in the creation of a second series on the exterior of the building, titled Hay Cultura en Nuestra Comunidad (There Is Culture in our Community). In Patlán’s words, the idea was to “negate all planning and attack the wall directly with the medium.” This led to an improvisational process in which youth artists drew directly on the wall incorporating pre-Columbian designs while working around the several windows, doors, and moldings that broke up the space.

Many hands have contributed to the murals at Casa Aztlán over the decades. After a fire in 1974, artists Marcos Raya, Salvador Vega, Aurelio Diaz, Carlos Barrera, and others worked from 1975-1979 to repaint the exterior and add more portraits of figures of political and cultural import as well as of neighborhood residents. In 1994, the mural was restored again by Raya and Vega. By that time the figures depicted included Cuauhtemoc, Che Guevara, Benito Juárez, Frida Kahlo, and others. The community center lost the building in 2013 and a new owner painted over the murals in June 2017 to the outrage of local community members. However, in October of the same year, Ray Patlán and Roberto Valadez began to repaint the facade of the building with the help of Gerardo Cazares, Hector Duarte, Mark Nelson, and others using a community-approved design by Salvador Vega. This restoration was supported by the Chicago Public Art Group, Pilsen Alliance, and City Pads LLC.

3. Chicago Mural Group Report to National Endowment for the Arts ,1971